Wildlife Wednesdays: Disney’s Animal Kingdom is Batty about Bats on Halloween and Every Day

Think bats are scary? The scariest thing about bats is not having them around. Do you like bananas, cashews, cotton t-shirts, pickles or peaches? If so, you can thank a bat. From pest control to pollination, bats worldwide are important to people and nature. 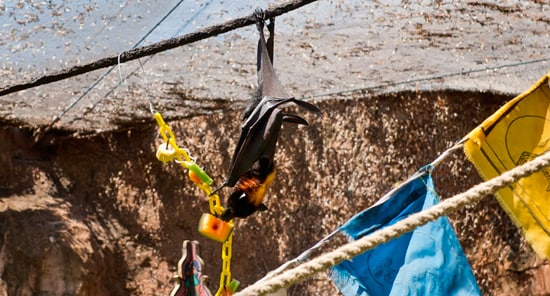 Guests visiting Disney’s Animal Kingdom can get to know bats better during a celebration on Halloween (what better day to celebrate bats?) devoted exclusively to this special-not-spooky species.

At Conservation Station, guests can discover what bats like to eat and where they live. By participating in a variety of games and activities, they can learn cool bat facts and what all of us can do to be sure that bats “hang around.” Guests also can meet our bat keepers and find out how we care for the bats (Malayan Flying Foxes and Rodrigues fruit bats) that make their home on the Maharajah Jungle Trek at Disney’s Animal Kingdom.

Likes (0)
Share Wildlife Wednesdays: Disney’s Animal Kingdom is Batty about Bats on Halloween and Every Day