“If it moves on wheels at Disneyland, I probably designed it,” said Bob Gurr, retired Imagineer and Disney Legend. In his Disney career of nearly 40 years, he helped develop more than 100 designs for vehicles ranging from turn-of-the-century Main Street vehicles, sleek bobsleds for the Matterhorn, the cars of Autopia, the futuristic Monorail and more.

Since his youth, Bob was fascinated with tools, mechanical devices and cars. His association with Disney began in 1954, when he was asked to consult on the design of Autopia ride vehicles. Walt Disney was so impressed with Bob’s knowledge and skill that he invited him to join WED Enterprises, today known as Walt Disney Imagineering. Bob went on to design one-of-a-kind vehicles, versions of which are now in use at every Disney theme park resort property around the world. He also helped design the mechanical workings of Disney’s first advanced Audio-Animatronics human figure, Abraham Lincoln, featured in Great Moments with Mr. Lincoln.

Following his retirement in 1981, Bob continued to consult on Disney projects, including the giant Ursula creature featured at Tokyo DisneySea. In 1999, he was honored with the Themed Entertainment Association’s Lifetime Achievement Award. Bob was named a Disney Legend in 2004. 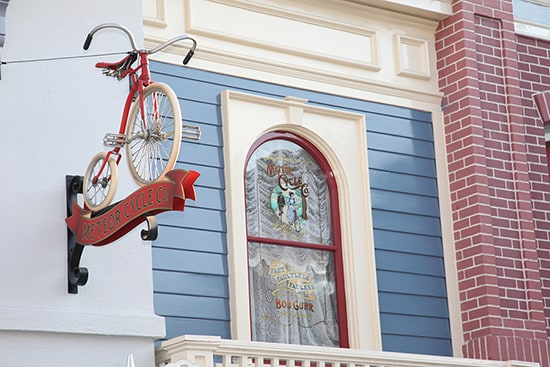 Five years ago this month, Bob was honored with a Window on Main Street, U.S.A., above Disney Clothiers, Ltd. The inscription, “Leading the Race to the Future – Meteor Cycle Co. – Our vehicles pass the test of time – Fast, Faultless and Fadless,” is a reference to Bob’s legacy and his love of mountain biking. At the window dedication ceremony, Bob shared that he had enjoyed many memorable days at Disneyland including opening day, the day in 1959 when he gave Vice President Richard Nixon the first trip on the Monorail, and now, this day would be added as “frosting on the cake.”