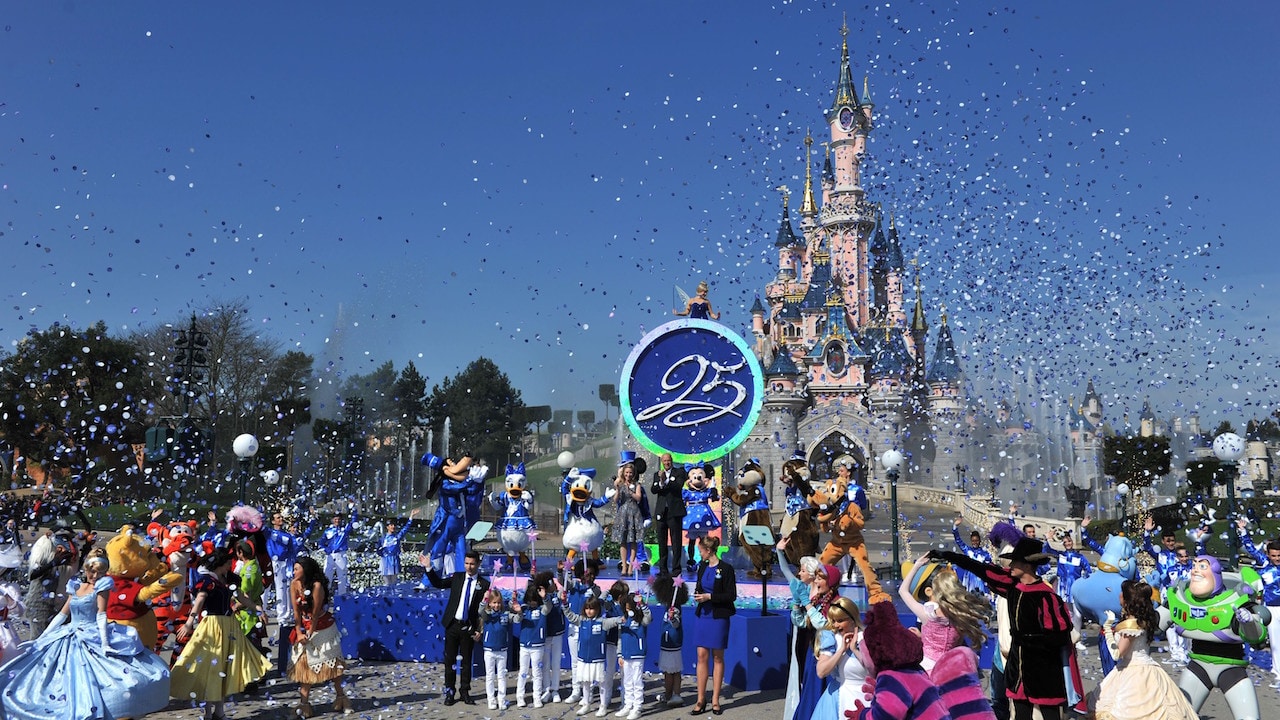 What a day here at Disneyland Paris. I am Tres Fatigué!

It has been one of the greatest experiences helping with the 25th Anniversary kick-off with my friends here in Paris.

The day was filled with magical experiences – I can’t count them all.

The centrepiece of the night’s events was the debut of Disney Illuminations – the superb new nighttime fireworks spectacular – preceded by a surprise performance from none other than SUPERSTAR JOHN LEGEND!

Legend surprised the press, media and the guests at Disneyland Paris with the performance of three songs: “All of Me,” “Love Me Now” and his new rendition of the hit song “Beauty and The Beast” from the blockbuster live action film. The performance took place on a specially-designed stage at The Hub with Sleeping Beauty Castle as the backdrop. The setting was classy and classic – circular stage, piano and spotlight.

This was John’s first visit to Disneyland Paris. Following his performance, he took time to take a photo with Mickey Mouse and Disneyland President, Catherine Powell. John also expressed his admiration of Disneyland Paris and being a part of the 25th Anniversary celebration by speaking with members of the European Press.

It was a spectacular night.

Throughout the afternoon here we’ve been privy to the debut of all the fabulous new entertainment here at Disneyland Paris, specifically created for the 25th Anniversary.

They created not one – but two – stage shows performed in front of Sleeping Beauty Castle – Tres Magnifique!

Mickey presents Happy Anniversary Disneyland Paris is a heart-warming show that features all your favorite things about Disney Parks entertainment – beloved characters, fabulous Disney music and a host of singers and dancers – what a spectacle. Mickey – in a sparkly new blue costume – invites his friends and Disneyland Paris guests to celebrate 25 years of magical memories.

And for those princess fans out there, The Starlit Princess Waltz is a princess-themed extravaganza with Aurora, Ariel, Belle, Snow White, Cinderella, Jasmine, Rapunzel and Tiana, dressed in magnificent ball gowns, create a magical moment against the unique backdrop of Sleeping Beauty Castle and its spectacular fountains. Tinker Bell herself has transformed the Royal Castle stage into a starlit ballroom. It’s stunning.

Lest we leave out the parade – Disney Stars on Parade features huge, spectacular floats with your favorite characters like Crush and Squirt from Disney●Pixar’s “Finding Nemo,” a ton of Disney princesses and adventurous pals from Disney’s “The Lion King,” “Jungle Book” and “Peter Pan.” And, of course, Mickey and his pals are there too.

All this entertainment – one doesn’t know how to fit it all into one day – But I’m sure going to try.
More later!

Just checking in with a little celebrity update: One of our favourites at the Disney Parks Blog is here – having a blast.

Teri Hatcher (“Desperate Housewives,” “Supergirl”) is on hand, of course, to celebrate the 25th Anniversary of the resort – this time with her dad – on his first trip to Paris.

After a few days of enjoying Paris with her father, Owen, Teri arrived at Disneyland Paris, ready to celebrate. She caught the debut of the new Disney Stars on Parade, talked with some of the media guests in attendance, and even posed for a photo with Chip and Dale.

Word is – that she’s going to stay for the debut of the new Disney Illuminations night-time show tonight.

Another batch of vacation memories made!

Along with Teri, there a LOT of European celebrities and models here too. I don’t know any of their names really, but they are all gorgeous and look like they’re having fun.

Anyway, back to the fun for me! Will update more later. Au revoir. 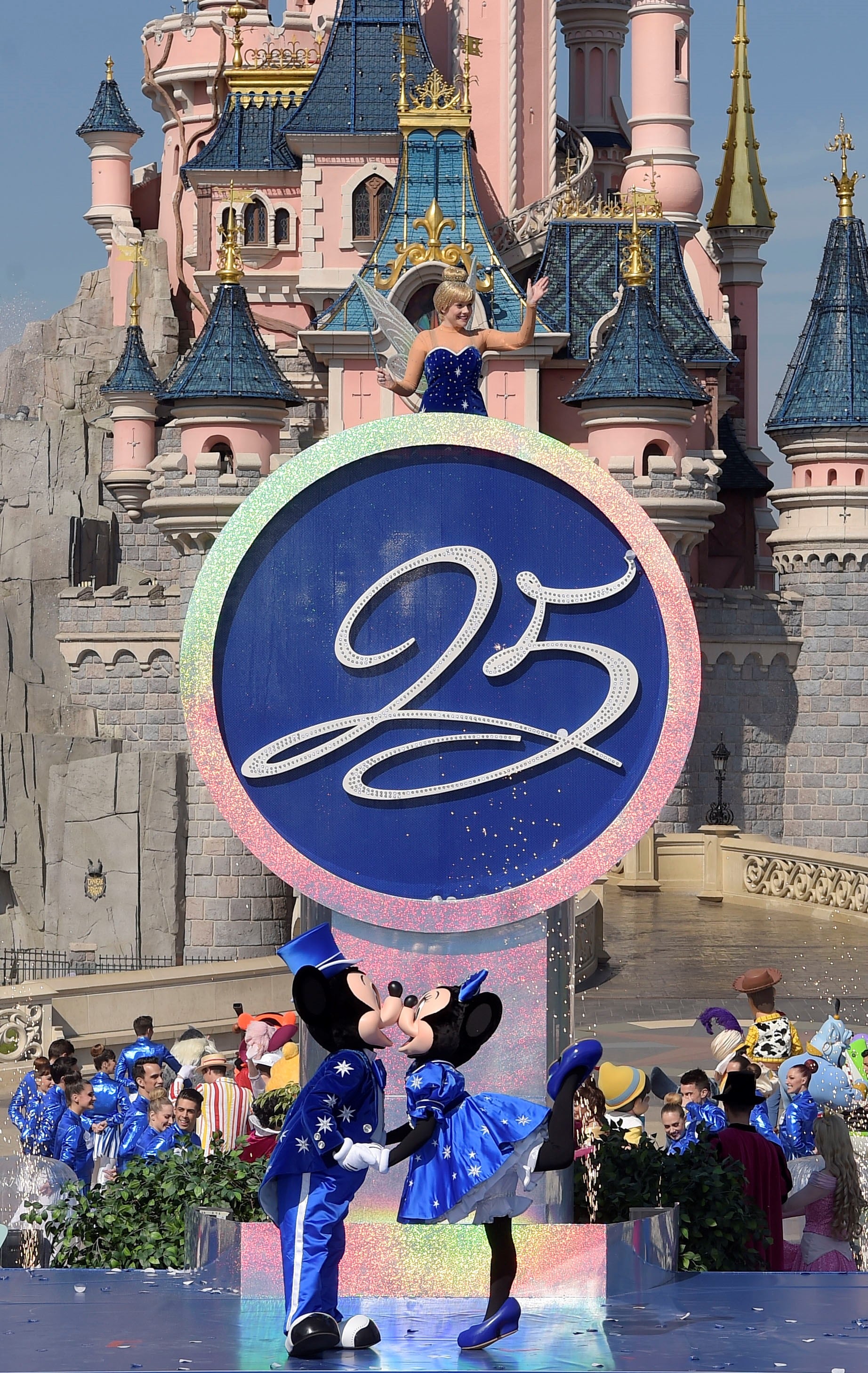 Jour Deux (or Day Two) of my reports from Disneyland Paris! Let the celebrating begin!

A little early you say? I’ve been telling you that the Disneyland Paris 25th Anniversary celebration starts on March 26 (See yesterday’s post for more info).

Well, that’s true, but what’s a Disney Celebration with a big star-studded party?

Leading up to the start of the big day for guests, the Disneyland Paris team has rolled out the blue sparkly carpet for a sneak preview of the festivities.

Walt Disney Parks and Resort Chairman Bob Chapek and Disneyland Resort Paris President Catherine Powell launched the ceremonies in front of Sleeping Beauty Castle with a look back at the history of the resort; the honor that it has had upholding Walt Disney’s legacy of making dreams come true for guests around the world – with a nod to making more dreams in the future.

“Since it opened its gates in 1992, Disneyland Paris has been a place where the young and young at heart can step into the worlds of their favorite stories, meet beloved characters, and become part of the magic in a way that only happens at a Disney Park,” Chapek said. “And we’ve got even more magic in store for our 25th anniversary.”

Powell also talked about the legacy she feels as the resort’s leader.

“We are proud to bring Walt’s heritage to life in the heart of Europe, to have made strong ties with Paris and France and to have made our guests dreams come true for more than a quarter of a century,” said Catherine Powell, President of Euro Disney S.A.S., “Now, more than ever before, Disneyland Paris is looking to the future, and continuing to exceed our Guests’ expectations.

The ceremony ended with a dazzling finale of fireworks led by Tinker Bell herself and a host of Disneyland Paris cast members and favorite Disney characters.

I’m a sucker for a fireworks finale!

Well, that’s it for now.

I will be updating this post throughout the day; and we’ll be sending updates through social media using the hashtag #DisneylandParis25.