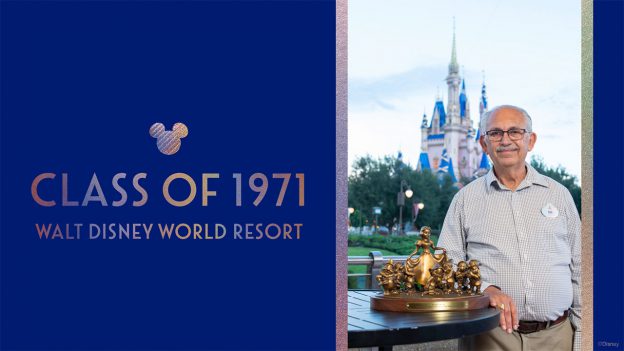 We continue to celebrate our Class of 1971 cast members and this week, we want to recognize Ben Skelton, a cast member who has been working at Walt Disney World Resort for over 50 years. Ben started his Disney journey before the Seven Seas Lagoon was filled with water, and eventually made his way to Magic Kingdom parking and moved to Fantasyland attractions in 1975.

Before driving the trams to and from Magic Kingdom Park, Ben was part of the Magic Kingdom Grand Opening Dedication on Oct. 25, 1971 and sang in the 1,000-piece choir. “After that, I decided to stay with the company for a year, which turned into 50. As the years went on my passion grew to provide for guests and cast.”

Ben’s first attraction was 20,000 Leagues Under the Sea at Magic Kingdom Park and he has been trained in all Fantasyland attractions, besides the newer ones. However, nothing can top his favorite attraction, “it’s a small world.” It’s an attraction that brings so many good memories and one that Ben has brought many magical moments to guests that visit. “I’ve trained so many other cast members on [“it’s a small world”] and it’s one of my favorites due to the history behind it and the fact that I’ve gotten to see it change over the years, plus I have the original sheet music from the grand opening dedication.”

Some of Ben’s favorite moments throughout his career were when he trained other cast members. “Promoting a diverse and inclusive environment introducing all cultures to attractions for over 35 years is a favorite experience of mine,” said Ben. “Including those relationships built with international cast members who still keep in touch today.” Inspiring others to not give up and to not be afraid to improve both at work and personally is something Ben has incorporated in his role since starting his Disney career and a trait that was truly powerful when speaking to him.

When asked about what it’s been like to experience all the different changes throughout the years, Ben beamed with joy. “Watching this small company become so huge was life changing and brought so much joy to myself and the cast members around me, especially since I’ve been able to watch my children grow with the company and be able to enjoy the parks just as much as I did.”

To see more of Ben, be sure to check out “The Most Magical Story on Earth: 50 Years of Walt Disney World” on Disney+ (subscription required).

If you’ve ever worn a Disney nametag, you can share your cast member memories with a special line of “I Earned My Ears” GIPHY stickers for each decade. Just search “WDW50Cast” for these and more 50th anniversary designs on Instagram, TikTok or Snapchat stickers and start creating!