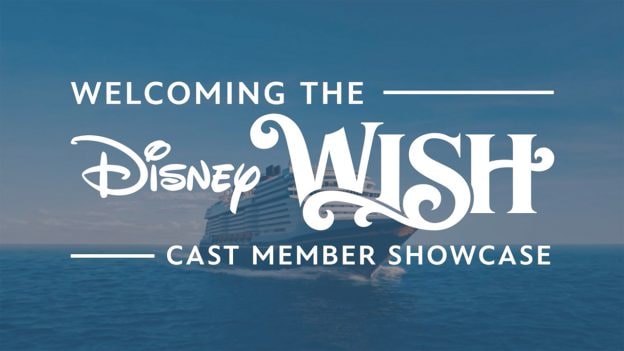 Cast Members Get a First Look at Disney Wish Experiences

The Disney Wish arrives in Florida on June 20, but before she pulls into port, the Disney Signature Experiences (DSE) team had a sneak peek of what’s to come during a special cast member showcase.

More than 1,300 cast members across DSE came together at the EPCOT World Showplace to sample food and beverage, check out the new crew costumes, preview entertainment and meet characters who will delight our guests on board the Disney Wish. This was the first time DSE cast members have come together in person in more than two years.

During the Disney Wish cast showcase, cast members were welcomed in true Disney Cruise Line fashion, by Captain Mickey and Captain Minnie, of course! Cast were also announced by the Walt Disney World Ambassadors as they entered, and presented with a Disney Wish magic wand.

“This is a big, big moment and one we’ve been waiting to celebrate! You truly make us very, very proud. Thank you from the bottom of my heart for everything you do.”

Following the opening remarks, Fairy Godmother led the audience in a “Bibbidi-Bobbidi-Boo” to magically transform the room into a showcase full of preview stations and photo opportunities, as she reminded us, “It’s not the slipper or the dress… but the hope in your heart that makes wishes come true.”

For an insider look into the exclusive cast event, check out the video below and hear what cast had to say!

“We are ready, we are excited, the ship is going to be spectacular!”

While the event touched on all five senses, one of the most celebrated aspects of the cast showcase was the reveal of a new Disney Cruise Line nametag. Celebrating Disney Cruise Line’s traditional ship design, the new nametag features a gold foil filigree around the crew member’s name.

The event was full of laughter, cheers, and even a few joyous tears and long-awaited embraces between friends. Olivia, another attendee, shared, “Seeing everyone in person felt like a family reunion. This event was so needed and so refreshing to experience. I think we all needed a little reminder of the magic that awaits us and that we create together.”

Aubrey, a Disney Cruise Line Vacation Agent, built upon the emotions many were feeling by sharing what the event meant to her, “I absolutely loved everything about the event, it was the first time in almost 2 1/2 years that I’ve stepped foot onto Disney property! It meant so much to me and was a blessing to be welcomed into my new family with Disney Cruise Line and Disney Signature Experiences.”

And we can’t forget about our Contact Center cast! Those who were not able to join the event in person were able to celebrate the Disney Wish in the office as the festivities continued. These incredibly important cast members who assist our guests with their vacations were able to take a brief moment to enjoy the event. Many shared that this was the “best day ever” as they truly felt like they were on the ship!

For many, the celebrations were a true homecoming as some cast had not seen each other in over two years. For others, it may have been their first Disney experience as a new cast member. But for all, it was a thrilling event-long overdue, but timed perfectly to celebrate the grandest wish of all… the Disney Wish.

For more information on the Disney Wish, visit DisneyCruiseLine.com.